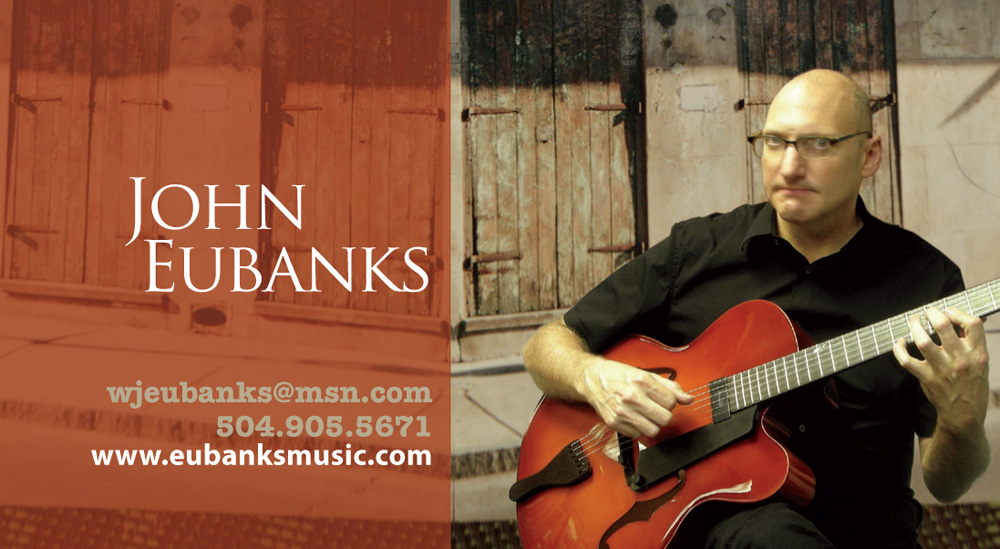 Master guitarist John Eubanks has been residing in the Crescent City since 1988 where he is in demand as a guitarist and teacher.  Living in New Orleans has provided John with an opportunity to record and perform in varied musical settings with leading artists.   Originally from Shreveport La., he is a versatile instrumentalist who brings a New Orleanian’s stylistic awareness to the many different genres in which he regularly performs. John’s schedule includes a mix of traditional jazz, modern jazz, Brazilian mandolin and guitar, orchestral work, and musical theater and he takes pride in getting the right sound for each unique setting. John plays all styles of guitar, banjo, and also mandolin, an instrument that has a strong presence in Brazilian and American music. The mandolin grew from being a double used in show settings into a passion which remains today.

John began his musical journey at the age of 12, studying for two years with Mike Loupe in Thibodaux, La.  After moving back to Shreveport and graduating from Harrisonburg High School, John spent one year as a private student of vibe/Piano virtuoso Eddy Kozak. The experience at Kozak’s Studio gave him a solid background in music theory and reading music. During this time he also got valuable experience working at the Marjorie Lyons Playhouse, with the Shreveport Symphony and with Kozak’s own band.  John continued his study at NSU in Natchitoches for one year before leaving to attend UTA on a scholarship where he studied with Charles Postlewate, Clint Strong, Rich Bratone, Bill Snodgrass and Jack Petersen while attending master classes with Gene Bertoncini, Howard Roberts, and Johnny Smith.  John played a concerto written for Smith as soloist with orchestras in Denver and Arlington. After graduating from UTA he made stops in Nashville, Scotland and Baton Rouge before settling in New Orleans.

In New Orleans in 1988, John began work on a MA in Music at Loyola University while teaching. At Loyola he studied with John Mahoney, Steve Masakowski, Mike Pellera, Johnny Vidokavich, and Victor Goines. In 1992 John took over the jazz guitar adjunct faculty position which he held till 2004.   John still teaches a few select students while maintaining a solo career. The solo gigs allow John to expand in new directions and keep his collaborative projects current.

Listen to some clips off of my new CD ‘Tain’t what You Do here!